What if your DNA would be infectious?

Evolutionary changes take many thousands of years to occur in nature. But what if you could experience multiple genetic adaptations, changes, incarnations in your own body... within a single lifetime?

This is the story of BODY FLUID, a virus that makes your DNA contagious. We’ve designed a future where evolution is possible without reproduction. In order to enhance the human, we chose this as it is the constant that has driven us to the stage where we are now. In this future, an intimate act is the literal colliding of the body with an irreversible impact. But unlike other projections of genetically modified futures, BODY FLUID acts with a randomised nature, similar to how natural reproduction has worked for millennia.

We are definitely at a point in time at which we’re asking important ethical questions of genetic modification. At the same time, the strong human need for more and more advanced self-improvement is constantly growing. Evolutionary changes take many thousands years to occur in nature.

This is the story of the body fluid, a virus that makes your DNA infectious. We’ve designed a future where evolution is possible without reproduction. In order to enhance the human, we chose this as it is a constant, that has driven us to the stage where we are now.

Fey was one of the early adopters who was willing to become multiple versions of a human being. Aspects of eye colour, skin, nose and internal organs were exchanged randomly and naturally through sexual intercourse. Fey had become a genetic superhuman. A being that evolved multiple times throughout his lifetime.

and our metaphorical object gives you an impression of what this process may look like [If these two people had sex, what might they look like? the spinning represents the sexual intercourse between human and shows the morph of exchanging genes. what this morph looks like when people experience it.

This future was made possible by a breakthrough in gene therapy, where the introduction of a new gene could accelerate the expression of a given DNA sequence. With this new technology, an inserted genotype could be expressed in a human within minutes, weeks or months depending on the severity of change. 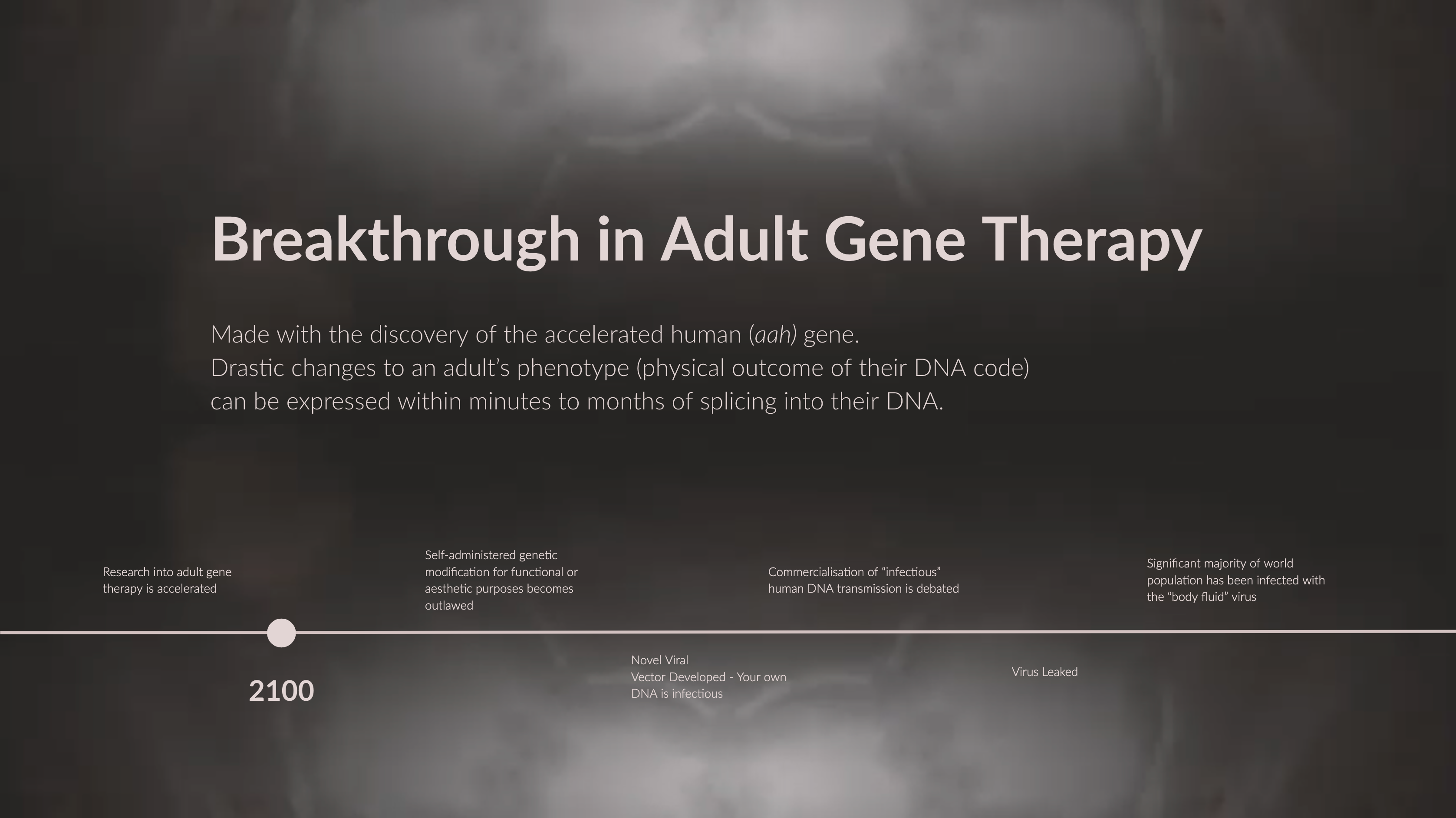 So from this, we spotted the opportunity for accelerating the rate of change in evolution by recombining the DNA of human adults. In order to make use of this acceleration of genetic expression, a novel method for gene insertion had to be developed. Current gene therapy uses adenovirus vectors, however, a smarter vector that could work in continuous harmony with a host was needed. This fuelled research into designing the perfect mutant adenovirus that could work symbiotically with a human host and their sexual partners. 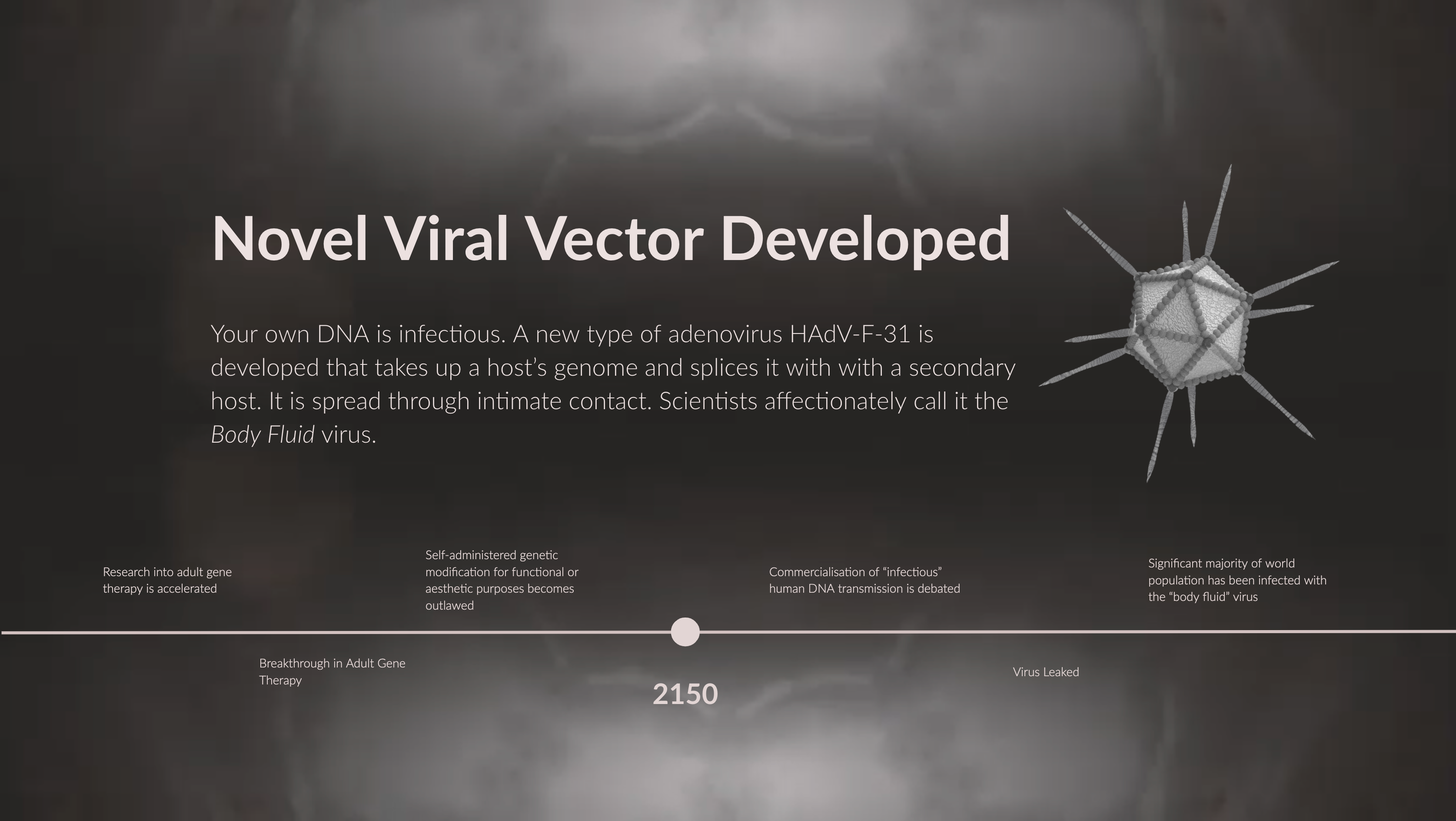 But how does it work?

It’s designed to take up a host’s genome and recombine it with a second host’s. It then uses the accelerated human gene to express this recombinant genome in the second host. So this expression is similar to what would occur if the two hosts had sex and passed on their recombined DNA to their child, however. This recombinant DNA is expressed in their adult bodies. Noted, that this virus spreads fast, through body fluids exchanged during intimate contact, and becomes infectious during human sexual maturity.

This new vector was designed to take up a host’s genome, and recombine it with a second host. It could then use the accelerated human gene to express this combination of the two host’s genomes in the second host. After finding that the virus spreads through intimate contact and bodily fluids. The virus is affectionately called the “body fluid” virus”. Phenotype is expressed throughout the body over a course of 2-7 days.

And then it happened. In 2190 the virus was leaked into the wider population. While this leak was unintentional, it has in 2200 become an accepted part of daily life. When it spread people started to be in a constant process of change and became fluid identities. Some of the people freaked (losing identities) out whereas Fey, for example, was very confident with his existence as what he called a “multi-generation body”. 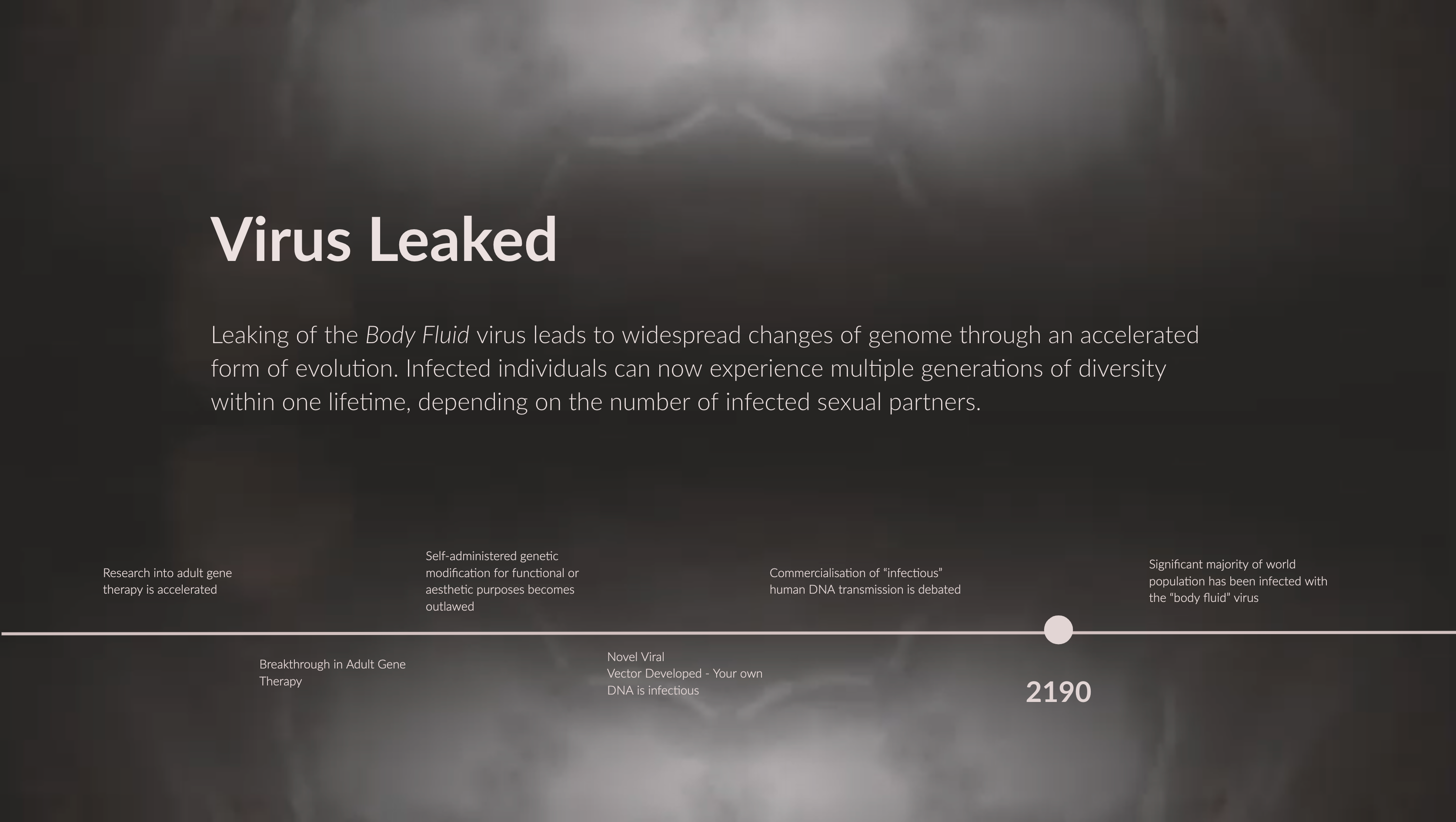 We conclude that the biggest areas of impact will be in Society, Health, and Technology. 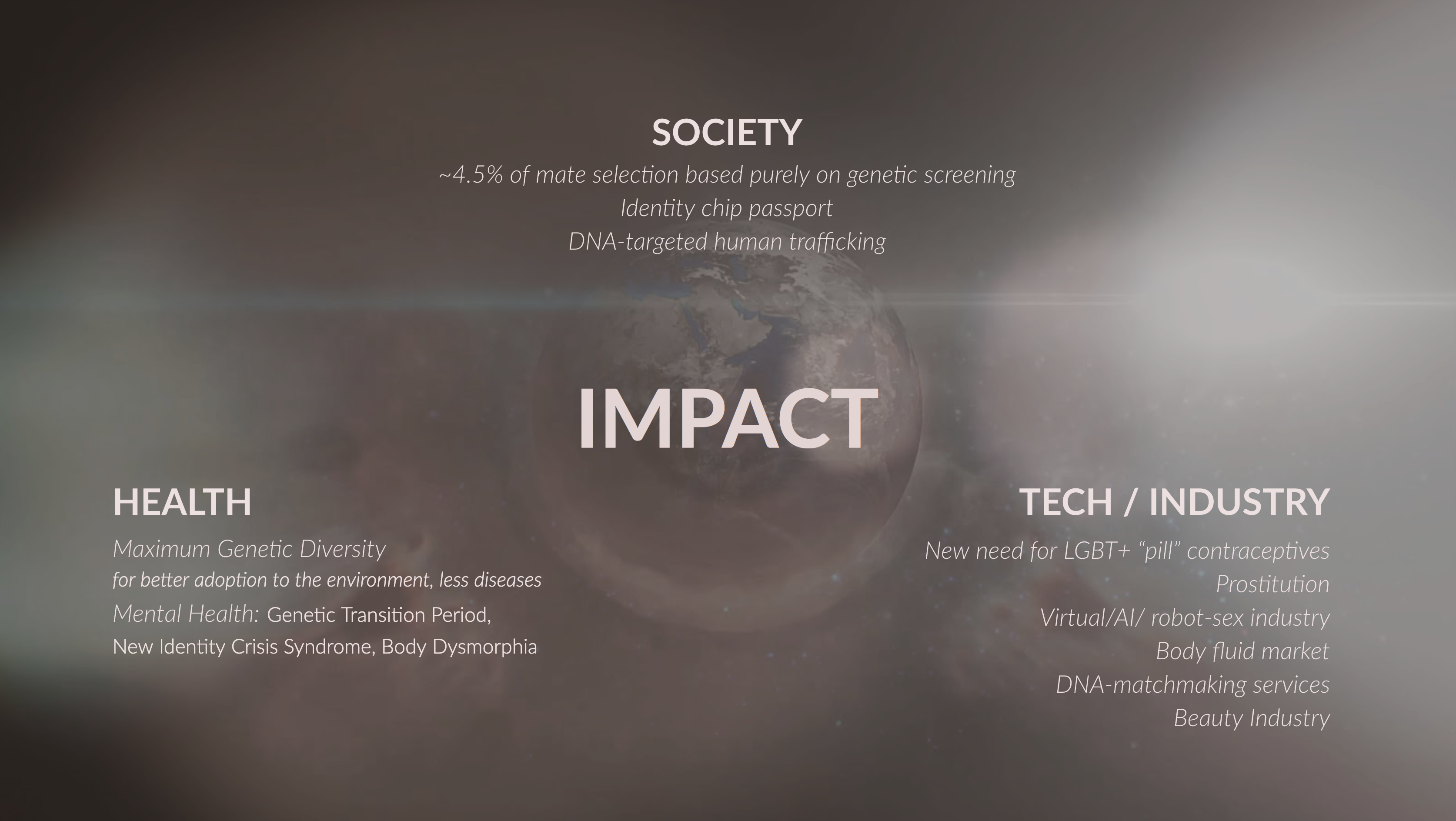 We also looked at the situation with a SWOT analysis. On the strengths we have what we have mentioned before in evolution it s the increase in genomic diversity within a population reaching the maximum possible with a limited amount of genes. But beyond this benefit, there is the possibility to nurture a greater feeling of closeness between partners. In this future, an intimate act is the literal merging of the body with an irreversible impact. But unlike other projections of genetically modified futures. The body fluid acts in a randomised nature, similar to how natural reproduction has worked for millennia. And finally, with this new evolution, we are giving individuals the opportunity to experience a greater range of body types.

As for weaknesses, everything we have mentioned has a greater consequence. As we said before, the change after sexual contact is irreversible in a tangible way, there is randomness here, that we know many will not be comfortable with, as it is, in terms of our body morphology, a possible loss of control. 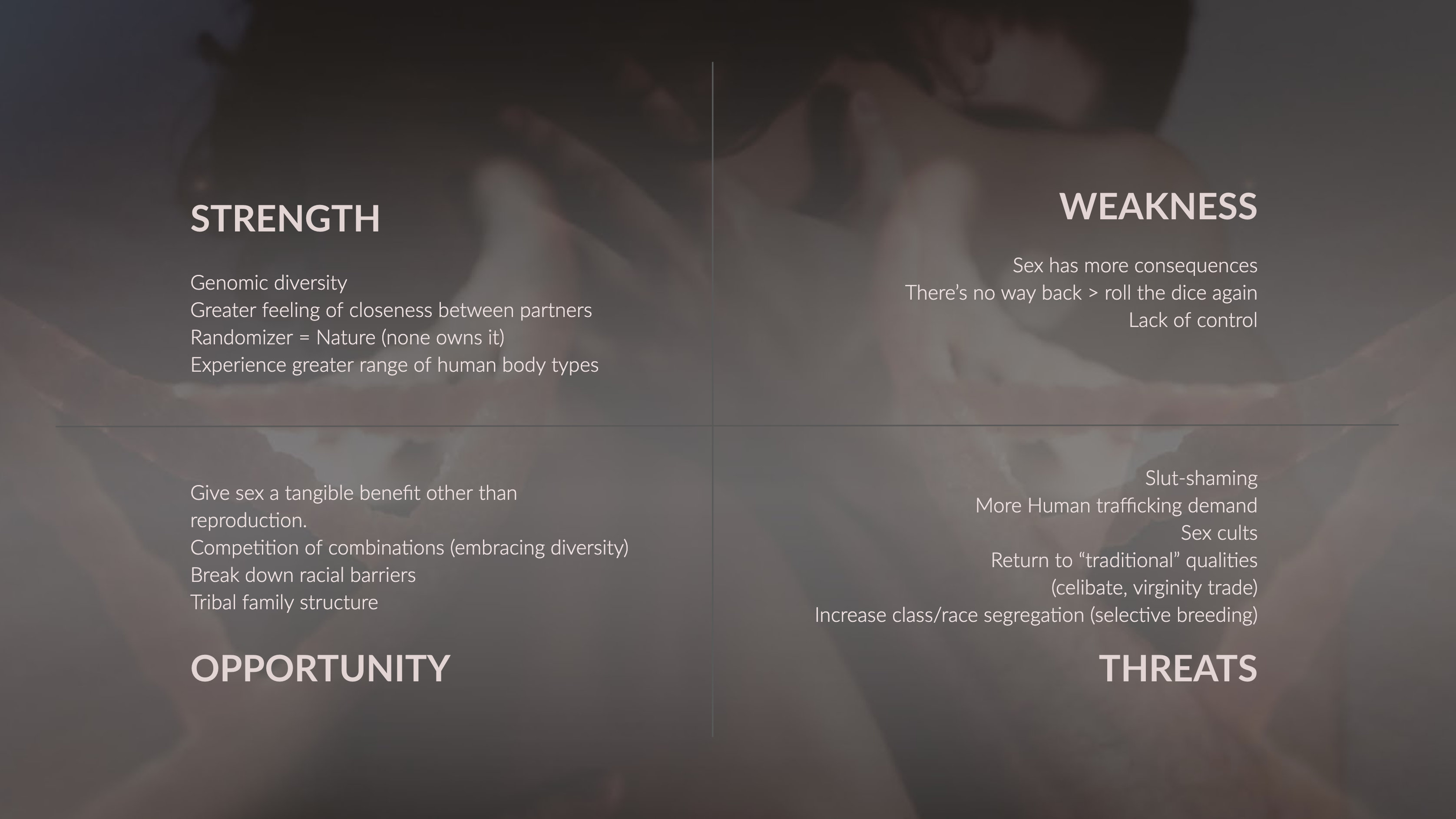